Food for Thought: Julie Guthman on Obesity and Food Justice in the United States

by Dolores (MAS)- I think about food all the time.  Not only do I love it, but  as a recent graduate of a nutrition program, it was all I talked about for 2 years.  While we often focused on the more cellular and biochemical details of nutrition—where digestion occurred, how different nutrients are transported and absorbed by the body, and how to extract the most nutrition out of our food, we often failed to ask more important questions.  Even if we, the nutrition experts, know what is best to eat and the best way to extract all of a food’s nutrition from it, if people aren’t eating these foods, then does it really matter? What are the vast majority of people eating? And is it all that bad?

In recent years there has been uproar and a focus on the obesity epidemic that has spread throughout the United States.  According to the Center for Disease Control, 37% of Americans are obese and obesity is linked to disease such as Type II Diabetes, heart disease, and stroke. I studied countless of different behavioral theories and looked at studies that used these theories to change the eating habits and help people lose weight to combat this obesity crisis.   However, most of these studies failed to provide fundamental solutions and changes in the end. END_OF_DOCUMENT_TOKEN_TO_BE_REPLACED 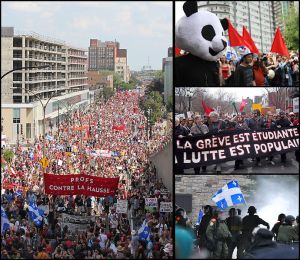 Over the past few months, Canada has witnessed a number of pitched battles around the most recent bout of cuts and austerity measures. In Toronto, workers staged a spontaneous wildcat in response to workers fired for mocking a government official responsible for measures attacking organized workers resulting in shutdowns of the airport on a broad scale. This comes in the context of a number of attacks on workers In Quebec, attempts to raise tuition and attacks the higher education system has led to months of general social unrest, strikes, and actions that continues today.

We feature two interviews recorded in May of 2012 in Montreal, Canada with organizers active in these struggles. Richard St. Pierre is a lifelong militant who grew up in Quebec, and has been active in working class struggles and revolutionary work for over 30 years. We discuss his experiences as a miner, in struggles around social reproduction, and the student struggle in Quebec.

Second, we feature a discussion of the world crisis as seen in Toronto with Ashley, a member of Common Cause Ontario and organizer with the graduate students union, amongst other social struggles. She discusses challenges in the crisis, the airport walkout, and the tasks of revolutionaries in social struggles today.